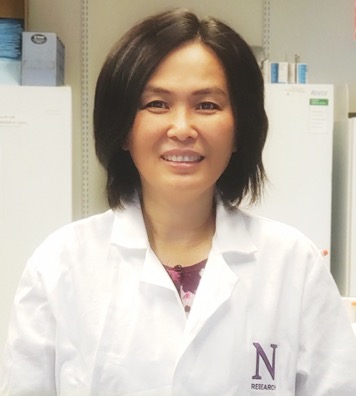 Project Aim: The long-term goal of this project is to determine the underlying molecular mechanisms of sex hormones, estrogen in particular, in brain function and their link to sex divergence in Alzheimer’s disease. This pilot study is to define the role of aromatase/E2/Era signaling pathway after menopause in reactive astrocytes in the brain, resulting neuronal degeneration and memory loss. Nearly two-thirds of the more than 5 million American living with AD are women, but the underlying molecular mechanisms for this sex divergence are unknown. To better understand the biological basis for sex differences in brain function that relate to AD, we will use a unique BArKO mouse model generated in my lab to reveal the role of estrogen to signaling in the regulation of brain function in both sexes. From this pilot work, we expect to define the role of estrogen signaling in reactive astrocytes, neurodegeneration, and memory function in the hippocampus which are closely linked to AD. This work will provide a foundation to guide future study of the estrogen signaling responsible for AD in women

Project Summary: Our work shows significant differences in bone regeneration between male and female rats undergoing spinal fusion. Manual palpation scores differed significantly between the two groups, with females having a lower mean fusion score. MicroCT evaluation also showed significant differences, with females having significantly lower smaller fusion masses, but which were more dense than the newly formed bone in males. Through biomechanical testing, we found that female spines had significantly greater range-of-motion than male spines at the fused segment. Given that males had larger but less dense fusion masses than females, this suggests that the size of the fusion mass (total volume) is more important for preventing motion at the joint than is trabecular density. In vitro studies have thus far shown that male and female bone marrow-derived mesenchymal stem cells (BMSCs) had induced levels of alkaline phosphatase activity 2 weeks post-induction, but females appear to have lower levels of both the gene and corresponding protein activity. Interestingly, basal (uninduced) levels of sclerostin, a wnt inhibitor, were significantly higher in female BMSCs than in males.  This study thus far corroborates our hypothesis that males and females may respond differently upon BMP-2-mediated induction of bone formation.

Publications that resulted from the project:

Project Summary: Secondary to the COVID-19 pandemic all nonessential work was halted by the University until the end of the summer of 2020. This set our time frame back substantially. Since laboratories reopened we have been successful in moving the project forward: - Mouse colony was reconstituted (3 months) - Experimental protocol was optimized for the female brain (3 months) - Injuries were induced and microglia harvested and sequenced (4 months) - groups include young male and female / injury vs sham injury - aged male and aged female / injury vs sham injury - All groups have been sequenced as of 4/20/21 - RNA sequencing analysis is currently ongoing and will be completed by summer 2021. Preliminary single cell RNA sequencing analysis demonstrates markedly different transcriptional profiles within the microglia of male and female mice at baseline. This baseline difference then corresponded to disparate transcriptional responses to brain injury 8hrs post TBI. The chronic time point is still being analyzed. These preliminary data suggest a different pathophysiology of injury between male and female mice after traumatic brain injury. Gaining this insight has the potential to reveal specific molecular targets for biomarker and therapuetic development and is the current focus of our ongoing analysis of the sequencing data. As our analysis proceeds we will determine which pathways are responsible for the differential clustering of male and female microglia as well as which genes are responsible for greatest differentiation between the sexes.

Future Plans: Abstract to the Northwestern University Department of Surgery research competition has been submitted. Two abstracts to the the 44th Annual Conference on Shock will be submitted this summer. Dr. Schwulst expects one full length manuscript to result from this work for publication by mid-summer. The data from this project will be used as preliminary data for a related R01 submission this fall as well as for a sex-specific R21 submission this fall (October cycle).

Project summary: The aim of this study was to measure the effects of walking with different prosthetic feet and heel height shoes on the biomechanics of women with leg amputation. All proposed study tasks were completed. Three women with leg amputation participated, testing iterations of two different heel height adjustable prostheses and three different shoe types of varying heel heights. We analyzed the motion of the ankles, knees, hips, and pelvis during walking, as well as the forces applied to these joints. We learned that women place considerable importance on their ability to wear different types of footwear. All participants expressed that this ability allows them to adapt to different social situations and enhances their confidence, a key contributor to quality of life. One participant was overwhelmed with emotion when she was able to walk with heels for the first time since her amputation. Importantly, the ability to use prosthetic feet that accommodate different heel heights via ankle adjustment is critical to facilitating healthy walking biomechanics. Such prosthetic interventions should be incorporated into women-specific rehabilitation guidelines.

Publications that resulted from the project:

Paper in progress: “Footwear effects on the gait of women with unilateral transtibial amputation: an observational case series,” submitted to the journal Physical Therapy.

Dr. Major is now conducting a line of research in this area involving external collaborations and with funding from the DoD and VA. He is planning to use the data from his study as support by the Shaw Award as pilot data for a larger proposal on this work.

Future Plans: We hope to complete the manuscript describing our findings within the next 6 months.  This will support grant applications in the fall of 2021.

Project Summary: Our original proposal was based on preliminary data showing that during chronic kidney disease (CKD), female mice do not suffer from subsequent cardiac injury as early as male mice do, despite producing higher levels of FGF23, a hormone largely contributing to cardiac injury in males. To explain this paradox, we proposed two hypotheses: 1. that CKD and FGF23 production started later in life in female mice reducing the period of exposure of the heart to FGF23 and 2. that female-specific molecular mechanisms antagonize FGF23 toxicity on the heart.

With the support of this award, we have found that CKD started earlier in life in females compared to males, that CKD progression to end stage renal disease is slower in females than males and that FGF23 levels are higher in females than males at any point during CKD progression. Therefore, we excluded our first hypothesis and focused on molecular mechanisms of cardiac injury. Using gene expression profiling in hearts of males and females with CKD, we have identified that signaling targets of FGF23 deleterious effects on the heart are activated in males, but not females, despite higher FGF23 levels. This suggests the presence of factors antagonizing FGF23 toxicity in females. We have found that these molecular targets are also controlled by estrogens. At the end of this award period, we have applied to an NIH grant where we propose that estrogens antagonize FGF23 cardiac toxicity females, who have higher levels of estrogens than males, are therefore less susceptible to develop FGF23-induced cardiac injury in CKD. This project will help develop new gender-optimized therapeutic strategies by providing insights into the cardio-protective mechanisms against FGF23-induced cardiac injury.

Grants that resulted from this project: With the data obtained from this project Dr. Martin applied to an NIH R01 grant NIH/NHLBI 1R01HL148224-01 "Sex-Dependent Mechanisms of Cardiac Injury During Chronic Kidney Disease". This grant was reviewed by NIH study section on Feb 28th, 2019.

Project Summary: To date, several stress-responsive neuromodulatory systems, most prominently the oxytocin system, have been identified as a source of sex differences in social and affective behaviors. Oxytocin is currently tested in several clinical trials as treatment for autism, anxiety, and even schizophrenia. However, to better predict oxytocin actions in males and females we need to further our understanding of the sex-specific neurobiology of the oxytocin system.

The main goal of this project was to develop a new method for studying the role of oxytocin receptors (Oxtr) in generating temporal and spatial patterns of neuronal activity in response to stress in female and male mice.  To this end we studied in depth the main sex differences in Oxtr expression and function in the dentate gyrus of the hippocampus, a brain area known to play important roles in memory, social behavior, and anxiety.  We found a remarkable sex difference in the expression patterns of Oxtr: whereas in males the receptor is expressed mainly in inhibitory neurons (interneurons) contributing to social behavior, in females in is substantially expressed in excitatory neurons contributing to memory. We are now in the final stages of standardizing miniaturized microscopy in freely moving males and females, that will allow us to study sex-differences in the activity patterns of these neurons relevant for behavior.

Publications that resulted from this project: